The interception of a snake in a container of scrap metal last week provided a positive biosecurity start to the new year, says the Ministry for Primary Industries (MPI).

The snake was found dead at a Manukau scrap yard when a specially trained yard worker (Accredited Person) opened a container that had arrived in Auckland from Vanuatu. The worker passed the snake on to a MPI quarantine inspector who had arrived to assess the cargo for biosecurity risk.

The snake has yet to be formally identified, but is believed to be a non-venomous boa from the Candoia family.

Geoff Gwyn, acting Director Border Clearance Services, says the snake was very fresh and appeared to have died from fumigation – a process that all imported containers of scrap metal undergo before being unloaded.

“We see scrap metal consignments as high risk for hitchhiking pests, insects and soil, which is why MPI requires all imported scrap metal containers to be fumigated at their first port of arrival,” he says.

“The interception showed that the different parts of our border biosecurity system are working as they should,” he says.

“For example, we rely on Accredited Persons to recognise biosecurity threats when they open shipping containers and to take appropriate action. And if the container hadn’t been fumigated, we could have had a live snake on our hands.”

He says the Ministry for Primary Industries has a team of highly trained quarantine inspectors and dog teams to respond to any live snake incursions.

“New Zealand enjoys a much envied status of being relatively free from venomous pests. We want to keep it that way.” 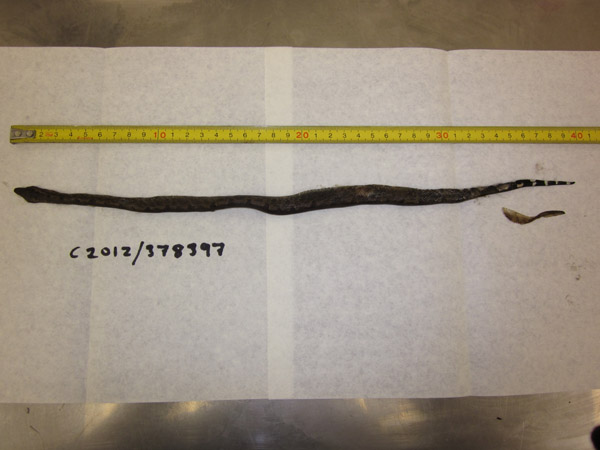