In March 2018, we found larvae from an exotic mosquito species, Culex sitiens, near the Kaipara Harbour, north of Auckland. Find out about the mosquito and what we're doing about it.

Culex sitiens is wide-spread in Southeast Asia, the South Pacific, and Australia.

It is known to transmit diseases such as Ross River virus. However, this is not a risk for New Zealand as this disease is not present here. Culex sitiens may also be able to transmit Japanese encephalitis but this has not been observed outside of a laboratory.

How was it found?

Culex sitiens larvae were found near the Kaipara Harbour in the Kawau Parua Inlet (north of Auckland). The larvae were found during regular surveillance as part of Biosecurity New Zealand’s National Saltmarsh Mosquito Surveillance Programme. Up to 19 November 2018, no adult mosquitoes have been found.

Contractors for Biosecurity New Zealand have taken water samples and set light traps to collect larvae and trap adult mosquitoes in and around the area where the larvae were initially found.

Only a small number of larvae have been found and no adults have been detected. Surveillance of the surrounding area has determined it has not spread from the site where they were originally detected.

We have a good chance to successfully eradicate the Culex sitiens mosquito from New Zealand.

On 13 November 2018, Biosecurity New Zealand began doing an aerial spraying programme to attempt to eradicate the Culex sitiens from the area near the Kawau Parua Inlet.

Biosecurity New Zealand has successfully eradicated exotic mosquitoes in the past, including in this area.

What is the spray?

The treatment being used is called Vectobac which contains the active ingredient Bti (Bacillus thuringiensis subspecies israelensis). Bti is approved for use in New Zealand and is widely used for mosquito control.

Bti is a biological and naturally occurring bacterium found in soils and has no negative effects on human and animal health or marine life.

It contains spores that produce toxins that specifically target the larvae of mosquitoes when they are in the water. The larvae must be feeding actively to be affected by the bio-control agent, which is only activated inside the gut of an insect.

This map shows the area affected. Spraying will occur on the areas marked with a red cross or triangle. 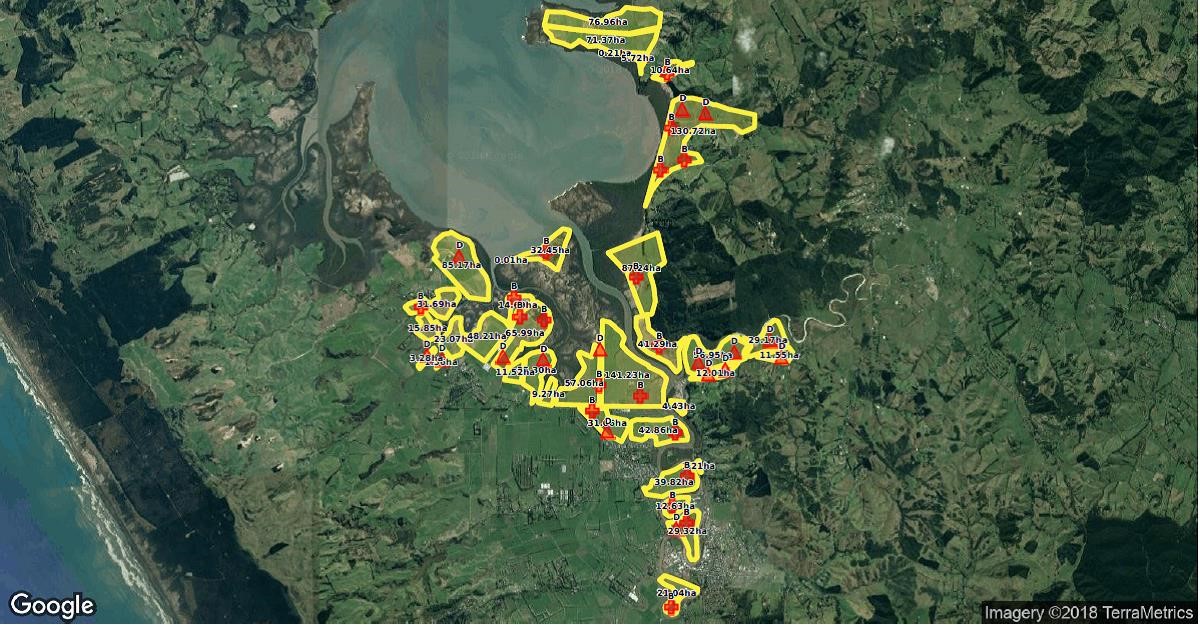 The mosquito that we are targeting only lives in brackish water, so the only area being sprayed is the very small strip of land bordering the intertidal saltmarsh or field drains running into this area.

We have not and will not be spraying directly over any residential areas or houses. The spray areas cover only field and paddock areas of fewer than 50 properties. There are no schools, homes or other habited areas being sprayed. The helicopters are flying at very low levels to minimise any spray drift.

Some properties are receiving a broadacre treatment (marked with red crosses) and other properties will only receive spray treatments to brackish water in field drains and the like (marked with a red triangle).

We have been liaising with affected landowners and in 2 or 3 instances where there is the possibility that a low-flying helicopter may scare animals, we have arranged to undertake a more intensive ground spray to minimise this impact.

The first application was carried out on November 13, and there will be 3 further applications, with a week between each treatment.

If you have health concerns after being bitten by a mosquito you can call the Ministry of Health's Healthline on 0800 61 11 16.