MPI on attack against dog ticks

The Ministry for Primary Industries (MPI) is seeking the support of Canterbury dog owners in a search for a possible population of an introduced pest – the brown dog tick.

A small number of these ticks have been found on two pet dogs at a Canterbury address near Christchurch.

“MPI is now taking swift action to find out how the dogs concerned could have picked up the ticks and if there is a wider population in the area,” says Response Principal Adviser Andre van Halderen.

“We are currently unsure how these dogs were affected as the two pets were born in New Zealand, have never left the country and apparently have not ever come into contact with any imported animals.”

The brown dog tick (Rhipicephalus sanguineus) is present in many countries, but has not previously established in New Zealand. The ticks have been found here on rare occasions in the past and have been successfully eradicated each time.

Dr van Halderen explains that because brown dog ticks pierce the skin of their host and feed on blood, they can carry and spread a handful of blood-borne diseases that can affect both animals and humans.

However, he stresses that none of these diseases are actually present in New Zealand.

“The Ministry of Health has assessed any risk to human health as very low. The spread of disease in humans by this tick is very rare.

“Nevertheless, this is a pest we don’t want in New Zealand and MPI is making plans to identify any populations of the brown dog tick present and eradicate them if possible,” Dr van Halderen says.

In the Canterbury case, the two dogs have been treated for the ticks and are confined to their home. Over-the-counter tick/flea treatments from a vet are very effective in controlling ticks.

MPI is now carrying out a range of tracing and surveillance activities including contacting any pet owners who may have visited properties where the affected dogs have been in recent months.

“We’re now keen to engage the help of Canterbury dog owners to look out for the pests. Full information on what to look for is at: www.biosecurity.govt.nz/pests/brown-dog-tick

In short, brown dog ticks are red-brown in colour and vary in size depending on the stage in their life cycle.

Young ticks (larvae and nymphs) are less than one millimetre in length and extremely difficult to see. Fully fed female adults (that are engorged with blood) can be around a centimetre long and round to oval in shape. This is the best time for pet owners to find them. Adult ticks are commonly found attached to the skin on the ears, back of the neck and between toes of a dog.

Canterbury dog owners who believe they may have found brown dog ticks on their animals should contact MPI on 0800 80 99 66.

If anyone outside of Canterbury believes they have found brown dog ticks, they should contact their veterinarian. 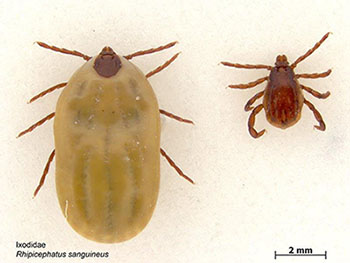