Pea weevils were found in April 2016 in the Wairarapa area of New Zealand. Biosecurity New Zealand is confident that they have now been eradicated. To provide more assurance, some commercial pea harvests will be monitored in the 2020 to 2021 season.

The pea weevil (Bruchus pisorum) is a small insect that can damage growing peas. It is an unwanted organism under the Biosecurity Act 1993.

If they became established, they could have a serious effect on our pea growing and processing industries.

Pea weevils were found in the Wairarapa area of the lower North Island between 2016 and 2017. Pea plants and pea straw were banned to remove the pea weevil’s food source and cause them to die out. The ban was lifted on 17 February 2020.

Biosecurity New Zealand has issued a Controlled Area Notice (CAN) to monitor some commercial pea harvests in the area where the pea weevils were last found in December 2017.

This monitoring will apply only to commercial pea crops harvested for pea seed or stock feed during the 2020 to 2021 season.

Map of the Controlled Area 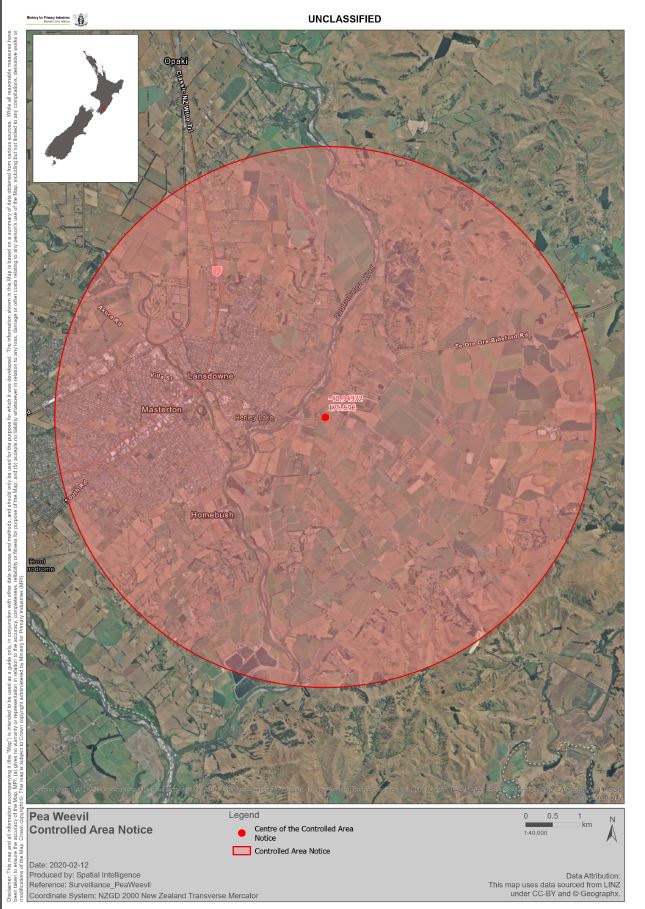 Commercial growers inside the Controlled Area

During the 2020 to 2021 season, commercial growers supplying pea harvests for pea seed or stock feed must:

Thank you for complying with these restrictions, which will provide more assurance that pea weevil has been eradicated.

These conditions do not apply to home gardeners or commercial harvests for supply as a processed vegetable.

Biosecurity New Zealand undertakes regular surveillance for the presence of pea weevils and other exotic pests and diseases. Farmers can help with this biosecurity surveillance by keeping alert and monitoring their own crops. A guide is available to help.

Pea weevils could have a serious effect on our export pea seed markets and the processed green pea industry if they ever became established in New Zealand.

Weevils spread by flying from one site to another, and can also be moved in infected pea seed, straw, or dirty farm machinery.

Pea weevil larvae feed on young peas, damaging crops. Larvae tunnel inside the peas, eating the contents as they mature. Pea weevils only affect green ripening peas, not dry peas, but the adults can remain hidden in grain for up to 2 years. Affected green peas can become foul and unfit to eat. Seed might still germinate but the seedlings are often weak and prone to disease.

Where in New Zealand?

Pea weevils were found on several Wairarapa farms between 2016 and 2017. A successful eradication was announced in February 2020.

Overseas, pea weevils are found in many regions, including the United Kingdom, Australia, and North America.

What to look for

Pea weevils are small (4mm to 4.5mm long) insects, brownish-grey in colour with white flecks. The end of their abdomen has a white marking that looks a bit like an airplane.

They lay between 1 and 12 long, yellow eggs on the outside of pea pods. Eggs hatch in 1 to 3 weeks and the larvae then burrow into the pea.

Pea weevil larvae are up to 6mm long, white to cream in colour, with a brown head.

If you have questions about pea weevils or the control measures: