We need your help to keep watch for the brown marmorated stink bug. This could attack a wide range of crops and infest homes.

Why brown marmorated stink bugs are a threat to NZ

The brown marmorated stink bug (BMSB) is an agricultural, horticultural, and social pest. It's native to Asia and has spread throughout North America and Europe.

See a map showing the global spread of the bugs

It isn’t established in New Zealand, but this sneaky pest hitchhikes on passengers and imported goods. We’ve caught them at our border many times. We need everyone’s help to keep an eye out for them.

The brown marmorated stink bug feeds on more than 300 plant species. If established in New Zealand it could decimate our fruit and vegetable industries.

During autumn and winter, thousands of bugs can enter houses to shelter from the cold. When they're disturbed they release a foul-smelling liquid which can make your house hard to live in.

Adult BMSB are a brown ‘shield’ shape and about the size of a 10 cent coin.

The easiest way to identify them is from the white bands on their antennae and alternating black and white markings on the abdomen. Its underside is a white/tan colour.

Stink bug eggs are light green, shaped like barrels, and are usually in clusters of 20 to 30. 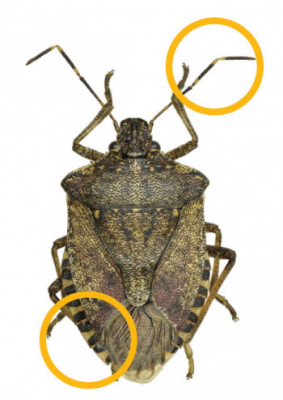 BMSBs look similar to some other bugs

There are many other similar-looking species – some of them very common in New Zealand. 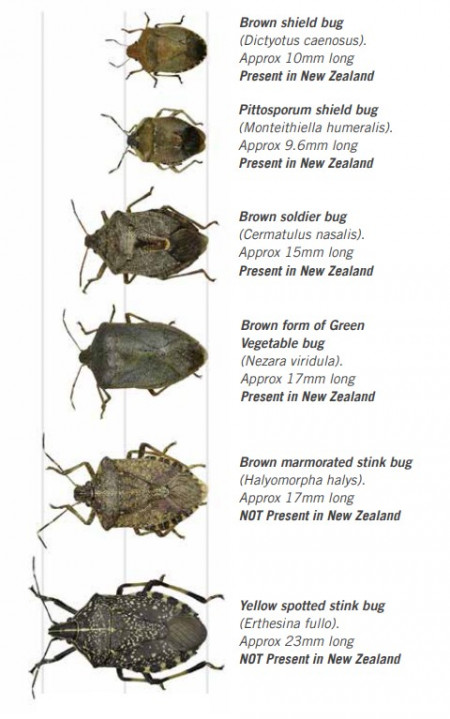 Some of the species that look the same as brown marmorated stink bugs (second from bottom). Download the poster or fact sheet for more details.

What to do if you find a stink bug

If you think you’ve found a brown marmorated stink bug – don't kill it.

Early detection will give us the best chance of eradicating them before they become established.

How to prevent bringing stink bugs to NZ

If you are travelling from Asia, North America, Chile, or Europe, check your luggage for brown marmorated stink bugs. They can hide in cracks and crevices, so pay extra attention to these.

If you buy anything online or receive mail or parcels from overseas, check them for hitchhikers.

Check your luggage and mail indoors, not outside. This will make it easier to catch any stink bugs you might find.

Look at it. Imagine thousands of them in your home.

That's where they end up.

By the way, when they're crushed, they stink like sweaty socks.

They're not in New Zealand yet, and we really want to keep them out of the country, and out of your home.

So if you find one, don't kill it.

Brown marmorated stink bugs are not dangerous to humans. They do not bite and are not known to transmit diseases. However, some people may be sensitive to their allergens and smell.

While they may not be dangerous, they do threaten our economy and are a household nuisance.

What MPI is doing about stink bugs

MPI has a number of measures in place to reduce the risk of exotic pests being introduced – including requirements for importers and screening at the border. But there is no such thing as zero risk. It is possible the insect could hitchhike its way into the country undetected.

These campaigns help New Zealanders identify brown marmorated stink bugs and know what to do if they find one. To help spread the word, consider printing and displaying a poster at your workplace.