The Southern Scallop (SCA 7) fishery is closed to fishing. It will remain closed until scallop populations recover. Find out what's happening with SCA 7 and how to stay informed.

What is the status of the fishery?

These recent surveys have shown that scallop densities and recruitment are overall still too low to support sustainable fishing of scallops in SCA 7.

The final assessment report for the 2021 surveys will be published on this web page (expected later in 2022).

Read the report for the previous survey conducted in 2020:

A strategy has been developed to ensure we are doing all we can to help scallop numbers rebuild to healthy levels. It includes objectives to improve the management of the Marlborough Sounds scallop fishery, and the ecosystem that supports it. It aims to guide the rebuilding of southern scallop numbers to healthy levels as soon as possible. This will provide a sustainable fisheries resource for generations to come.

Find out more about the strategy and its implementation

We have a web page where you can find more information on the strategy and its implementation. This includes a related implementation plan recently formed by the SSWG, as well as other related documents and updates.

What about the rest of SCA 7 (Golden Bay and Tasman Bay)?

While the Marlborough Sounds strategy is rolled out, the SSWG will consider how to manage and restore the Golden Bay and Tasman Bay scallop numbers. This will also include Croisilles Harbour.

History of the Southern Scallop Fishery

SCA 7 catch has fluctuated a lot since commercial fishing began in the 1950s. The past 10 years have seen a significant and continuous decline.

(To enlarge this graphic image, click or tap on it). 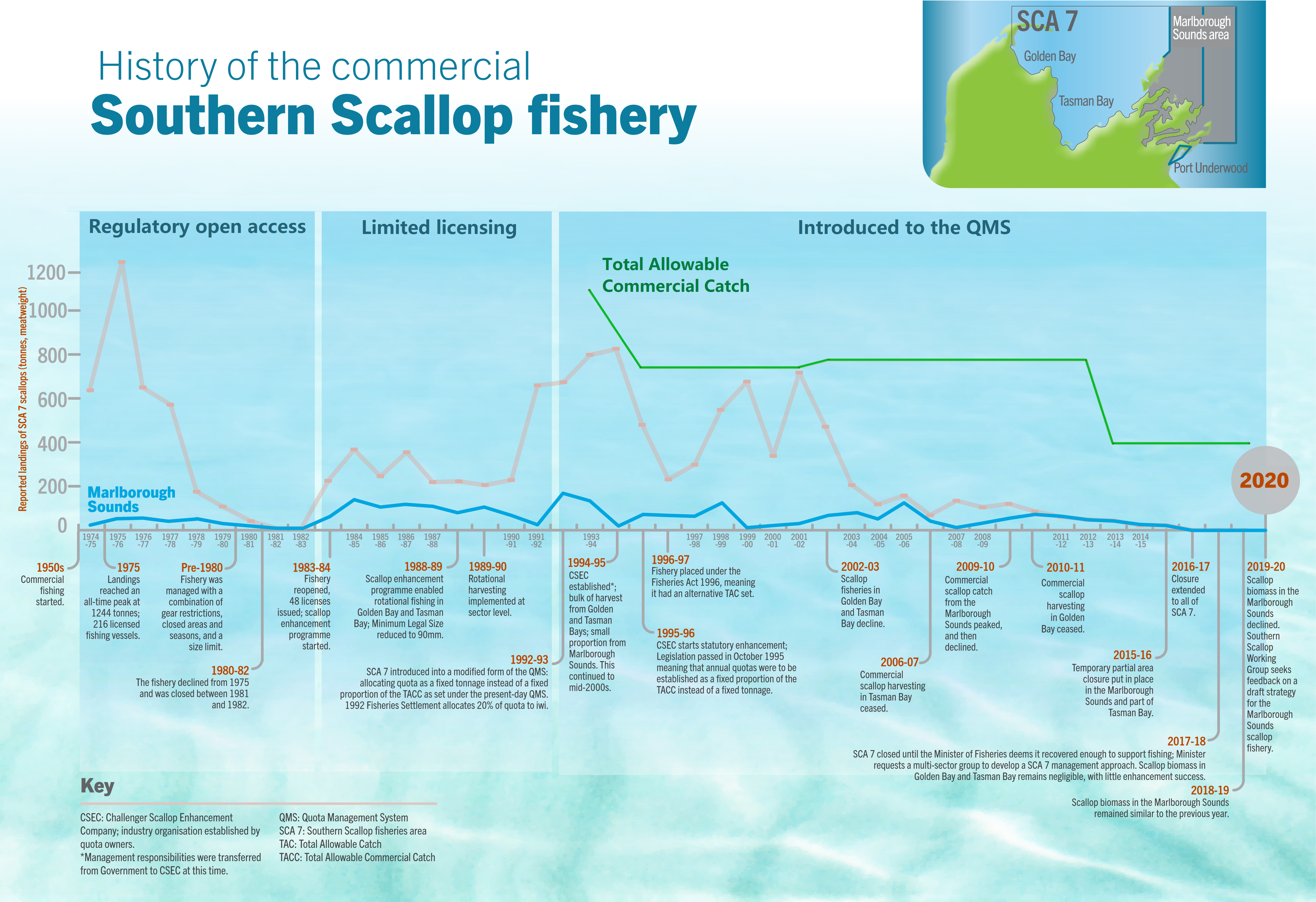 Show/hide information on this infographic

The infographic has a graph with the heading "History of the commercial Southern Scallop fishery". A map shows where the fishery is located at the top of the South Island. The graph shows the reported landings of scallops in the Southern Scallop fishery from 1950 to 2020. From the 1950s to the late 1970s there was a period of "regulatory open access" in the fishery, and scallop landings reached an all-time peak in 1975 at 1,244 tonnes of meatweight. Following this peak, there was a sharp decline in landings, and between 1981 and 1982 the fishery was closed due to low biomass. In 1983, the fishery reopened with limited licensing, and landings began to steadily increase again in the years following. In 1992, the fishery was introduced to the Quota Management System (QMS). Total landings of the fishery fluctuated between 200 and 800 tonnes meatweight until 2002, when both Golden Bay and Tasman Bay fisheries saw a large decline. Following this, commercial scallop harvesting was mostly carried out in the Marlborough Sounds. Landings continued to decline until the fishery was closed in 2016.

Public feedback about the closure

We ran a public consultation in 2018 to get submissions on the closure.

The Southern Scallop Working Group (SSWG) brings together iwi, commercial and recreational sectors of the fishery, and scientists and fisheries managers. It provides a platform for input into the future management of the fishery.

The members of the SSWG bring a variety of relevant experience and skills to the group.

If you have any questions, email info@mpi.govt.nz